Recycle Radio is the community radio project operating from Hebden Bridge, covering the Upper Calder Valley. This is an ongoing project, which includes Radio Training, Internet Radio Broadcasting, FM Broadcasts, and live-broadcast events. The core team of experienced radio professionals and dedicated volunteers have been working within the community for several years forging links with local community organisations, artists and musicians, throughout the upper Calder valley, and organising events, as well as working on other community radio projects throughout the North of England. Our main output is quality live radio, including talk radio and music, and all of our presenters are from the local community. 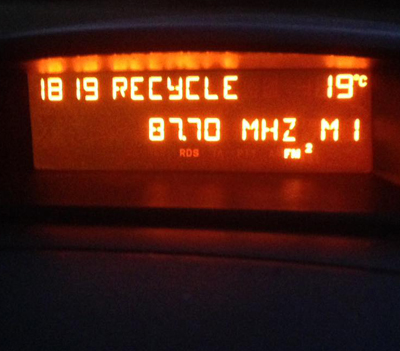 On September 29th to October 2nd 2016 Recycle Radio broadcast to the Hebden Royd area on 87.7 FM, from Callis Bridge to Luddendenfoot, and the hillside villages including Old Town and Heptonstall, and to the world on internet radio for four days of non stop music and talk on recycleradio.co.uk . This was the first ever FM transmission to be broadcast from Hebden Bridge. The upper Calder Valley's only community radio station, Recycle Radio, made a comeback, two years, and one flood later. Brought to you by members of the local community, it was packed with a huge variety of quality entertainment and local interest.

The output included news, music and interviews along with a number of segments designed to actively showcase community interest groups, projects and events along with local businesses, artists, poets, bands and musicians. There will be a huge variety of content, covering many musical genres, with broad appeal, reflecting the diversity of ages and abilities of the people involved in running the station. Audio content was augmented by social media, creating a real life interactive experience. This created a unique opportunity to create a focal point for the community and a voice for local artists and community groups.

The broadcast started at 7am on Thursday September 29th. The Mayor of Hebden Royd, Tony Hodgins officially opened the station live on air at 11am, along with Deputy Mayor Cllr Pat Fraser. Local shops, cafes and businesses supported the station by playing it throughout the day. The broadcast also covered Infolk, a regular 4-day festival of music and arts in Hebden Bridge. Based on a successful model trialled in Leeds, Salford and Chester, Recycle Radio produced a continuous online streamed broadcast from Hebden Bridge Town Hall in July 2014. This initial 4- day live-streamed webcast covered the Hebden Bridge Arts Festival and the Tour De France. Following its success, the Recycle Radio team have been working very hard, with lots of great support from DJ's, musicians and presenters (who also have hidden skills in carpentry, carpet fitting and general DIYery.) after several setbacks, including the floods, to get back up and running to bring great community radio back to the Calder Valley. They built a new studio in Salem Community Centre, using reclaimed and donated materials, time and skills.

A small team of experienced radio producers ran free training sessions over few months leading up to the broadcast, sharing their expertise with local people who have wanted to get involved. These ranged through all generations from school age children, students, working age and retired people; also local DJ's, known for their music events, including Chapter 4 and Scott Hub.

This is the launch of an ongoing community radio station in Hebden Bridge, further ongoing internet radio and FM broadcasts, TBA, and will eventually develop into a fully licensed FM and internet station serving Hebden Bridge and surrounding communities of the Upper Calder Valley.

This project re-launch was made possible by grants and support from Hebden Royd Town Council, The Archway Project (Youth project in Halifax), plus lottery funding. There is no advertising on the station, however people and organisations that have given support will be acknowledged on air. Most of the work behind the scenes is being done by a dedicated team of volunteers, who will also be presenting and running their own shows throughout the broadcast. It is hoped that this showcase will generate enough interest to bring in some more funding to continue the project. 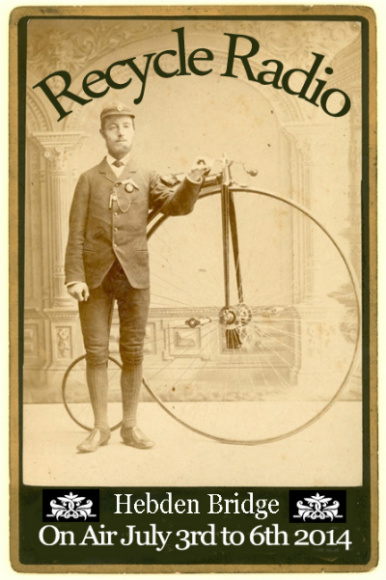 A small team of experienced radio producers ran free training sessions over the few months prior to the broadcast, sharing their expertise and enthusiasm with local people of all ages.

Recycle Radio’s output included news, music and interviews, showcasing community projects and groups along with local businesses, artists and musicians. The content was wide-ranging, reflecting the diversity of the people involved. It was augmented by social media, as well as a phone-in facility, creating a real life interactive experience.

This initial 4 day live-streamed webcast covered the Hebden Bridge Arts Festival and the Tour De France – Following its success, it is hoped that it will lead to a number of short FM broadcasts, eventually becoming the town's own permanent community radio station.

The Mayor of Hebden Royd, Jonathan Timbers, officially openined the station on air at 11am on Thursday 3rd July.

This project was made possible by grants and support from Hebden Royd Town Council, Hebden Bridge Town Hall, The Archway Project (youth project in Halifax), plus lottery funding.